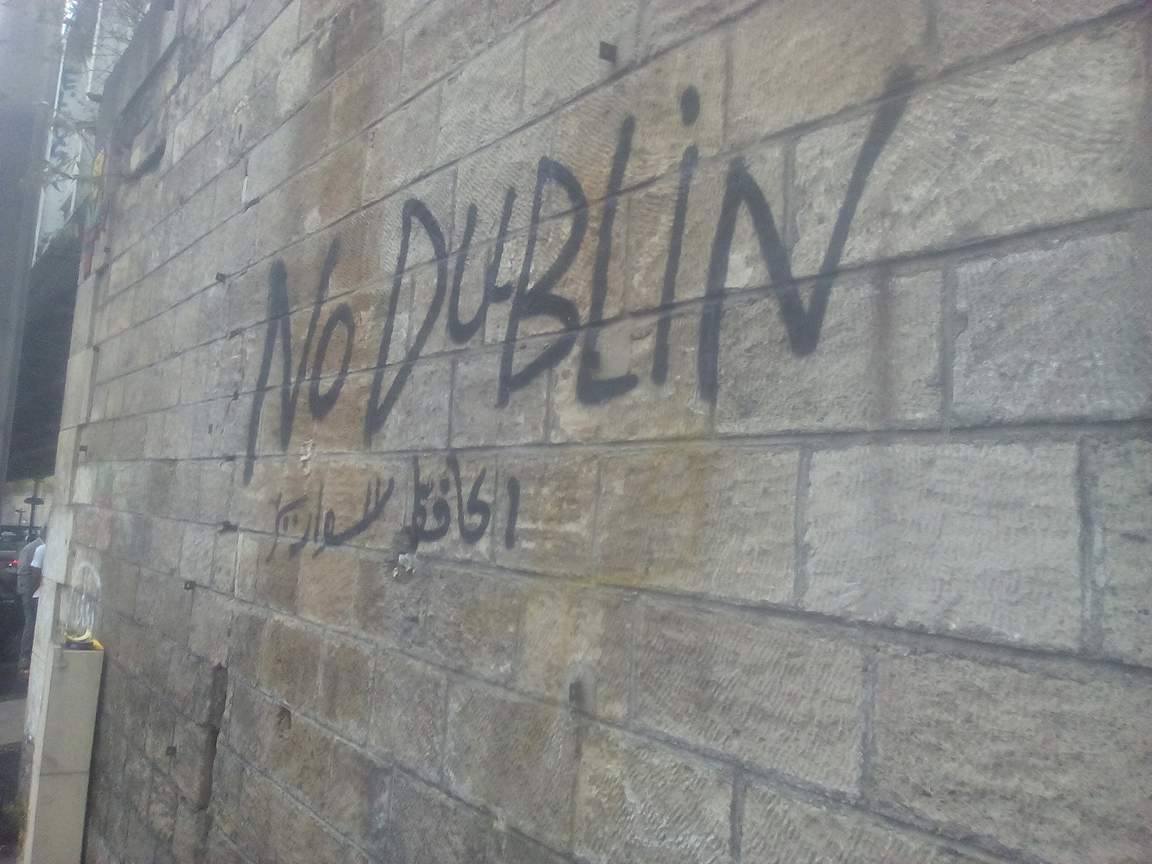 Down and out in Paris revisited: An Impression

“Life’s good”; a huge sign post on a building reaching far above the streets right outside the city center of Paris. On the street below a few hundred refugees sleep every night. They wait to get access to an asylum procedure in France and to get a sleeping place inside a camp. Since spring of this year, the amount of refugees and migrants on the streets of Paris is growing. During the last months the number of new arrivals per day in Paris is estimated between 80 and 200[1]. The government made more places available in so-called Urgent-Housing-Centres or in CAOS’s (Centres de reception et orientation) for the first 3-6 months but because there were not enough places NGOs offered places in hotels: Herbergement d’urgence  or ATSA’s (Accueil temporaire, service de l’asile)[1]. However, this was still not sufficient. Since spring a growing number of people sleep outside not knowing when or if they will get a safe place to sleep.
This is an impression of the situation in Paris, to show the world how far the borders of the European Union (EU) are reaching – not only around the bufferzone outside the EU, but also inside the EU. If you don’t have the right passport, you are made a second-class person.

Next to the traffic lights

Next to the busy junction of Porte de la Chapelle in northern Paris around 300 people were sleeping in tents and under highway bridges. They chose this place because it is in front of a camp for new arrivals. This camp provides around 400 beds. From this camp one should be transferred to a more permanent place – vacating place for new people. The people waiting outside receive a paper with a date, on which they are entitled to queue in order to request a place inside. However, almost every time they hear that they should return tomorrow.
The life outside is hard during this cold and rainy summer in Paris. Some have blankets or sleeping bags but too many people haven’t got enough to keep themselves warm during the nights. They have no access to clothes and showers. There are not enough toilets, only little fresh water is available. The only way to get access to these provisions is to enter the camp. These living conditions are inhuman, especially once you have realized where these people came from and what they have been through. Because most of the people are very weakened by the dangerous journey, they especially need care and a safe place.
Other people who are already in their asylum procedure neither have a home nor a shelter. For example Awad, a young man from Afghanistan who is around 20 years old, has been in Paris for 8 months already. He has papers and his asylum procedure has already started. But roof and shower are not available for him. He is just waiting and doesn’t know what to do or where to go.

Everyday the camp takes in a small number of people. So, everyday people queue waiting for hours sometimes even through the night. When the camp starts taking people in the military – apparently only white men – starts to control the queue, sometimes with violent actions, holding pepper spray and guns.
Refugees who live inside the camp can enter the camp by showing the camp’s card. The only other people allowed to enter are volunteers working for a French NGO. This NGO has a special deal with the state to work inside the camp, allowing them to distribute clothes etc.
Two criticisms can be made here. Firstly, this NGO only works inside the camp, whereas much need is outside. There are enough clothes and sleeping bags in their warehouse to help those outside but the deal with the state prohibits them to distribute outside the gate. Because of this, registration in the camp is necessary  for the people to get access to provisions.  In this way, the NGO is cooperating with the state’s goal of registration of refugees and migrants. Should this be the task of an NGO?
Secondly, there are people among the refugees who could help with the necessary work but they are not allowed without a European passport. For example, we met Ahmad in front of the camp who speaks five languages. He offered to translate but his offer was rejected because he didn’t have the right passport. In our view, this is a lost chance, because it would mean a lot for someone in such inhumane circumstances to regain some of his human dignity by bearing responsibility, using his skills. Another man, Faisal, asked us where he could help. “You can feel good here because you can do something and help us, but I want to do something as well!”. The NGO, not responding to these requests, is seemingly not interested in what real solidarity looks like and it should be asked who this deal is serving.

However, it is not only this NGO which is not responding to the requests of refugees to be able to life as an independent human. To feel human it is important to be in touch with friends and family. An important tool for these relationships is the phone. One day, Awad charged his phone in a pharmacy next to the traffic square, but the next time he came to the shop the owner refused his request saying that it is “of course” not possible “to come here everyday” and that he should try it somewhere else. Did this man realize that Awad and the others live on the streets everyday and that for them there are no opportunities left than to ask, to be dependent on others?

Jimmy who sleeps under the highway bridge in a tent told me that Paris is also called the city of fragrances and love. „But here I only smell terrible scents. And love? How do we experience love here? From whom?“ He has a long journey behind him. Through the Sahara, where some of memebers of his group died, to the coast and from there they floated 4 days on the Mediterranean sea without food and water. In Italy he saw refugees and migrants living in the streets, unable to find a job. He decided to travel further. He wants to work to give his family a peaceful life.

“We came here with a lot of energy to work, to do something, to live. But for a lot of us, here under the bridge we live a life previously unknown to us: passive, without dignity. The waiting and insecurity makes us crazy. There are no possibilities to do something, to build on something. Look at this place, look at us. What do you think? Like this, we cannot use our energy and our qualities.” 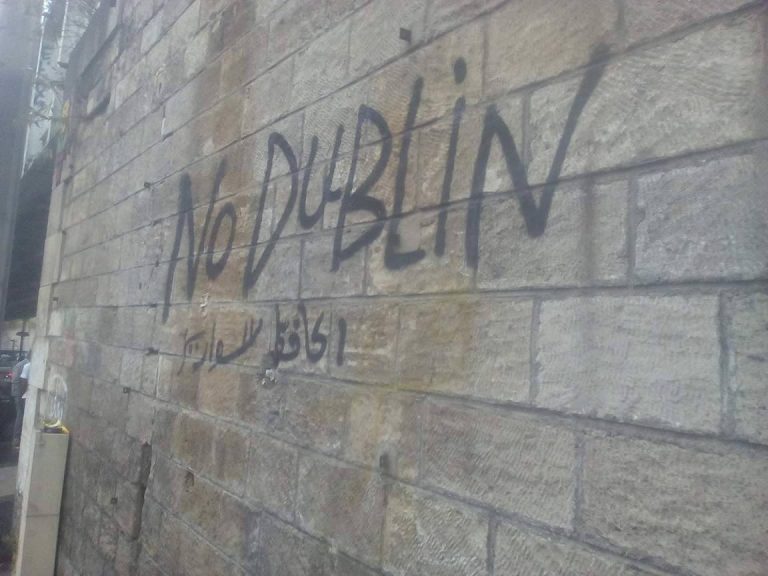 Most people have one big fear: that the fingerprints they had to register in another country in the EU will get them deported back to these countries because of the first country principle. This principle states that a person who wants asylum in the EU can only ask for it in the first country of the EU he/she enters. So every time a person asks for asylum, her or his fingerprints are being checked in the EU-database (EURODAC) for fingerprints and face recognition. When EURODAC reveals that someone has entered the EU in another country, this person will be returned to that country, regardless of his/her personal biography or family ties. The first country principle is an important part of the Dublin agreement, the basic bill of the Common European Asylum System (CEAS). It is important to know that the Dublin-law will become stricter within the new CEAS which is currently discussed in the European Parliament.
Walking around the camp we noticed that a lot of people spoke German. It turned out that they have lived in Germany and had heard that their asylum request is being transferred back to another country. However, going back to Italy, Romania, Greece or another southern/eastern country is no option. In most of these countries, like Bulgaria, a life for newcomers is even harder because of racism and poverty among the population and institutions like the police.
Moreover, this year Bulgaria took only a few hundred people and rejected several thousands. So they hope that an asylum request in France will give them the opportunity for a real asylum procedure. One of the boys in Paris said, while he was halfway laughing, halfway crying, that perhaps he should cut off his fingertips, because he is afraid to be deported back to Bulgaria. Hadas, a young Pakistanian lawyer, had been asked by the Taliban to join them because he speaks many languages. Therefore he fled his country, but unfortunately he experienced even more violence in Europe. He saw Bulgarian police beating up people in the streets without reason. He never experienced something like this in his life before.

Good life only with the right passport

In the city centre just a few streets away from Port the la Chapelle the „good life“ is being lived. Expensive restaurants, museums and shops are overloaded with tourists from countries all over the world. Here, every bed is warm, soft and secure. Here, you don’t see anything of the other life on the streets. The biggest difference between the tourists and those living in the streets? Their passport.
We need to show solidarity with refugees at every level and fight the CEAS!
Note: This impression was written on the 14th of August 2017. In the morning of the 18th of August, Porte de la Chapelle was evicted for the 35th time in two years by the French police. People were brought to different shelters like sporthalls for the first days or weeks. Of course, people had various feelings about the situation. Some were happy that they finally sleep under a roof. Others felt anxious because of the registration which might make them be deported back according to the first country principle. For sure, the police brutality with which such an eviction happens is inhuman and shows how the state is criminalizing refugees and migrants [2].
Moreover, it is expected that within a few weeks, things will return to the situation described above.[3]
Sources:
[1] https://medium.com/@AreYouSyrious/ays-dail-digest-7-7-2017-34th-eviction-at-port-de-la-chapelle-in-paris-9f2256dbc13e