Political change depends on the diversity of tactics which are used to make it. With the following chronology of actions we want to give some examples of different ways to express our protest.

Thanks to all the activists who did show solidarity with us and our demands. Please write us if we can add something.

After the self-organized project Hotel City Plaza Athens called for international action days to give more attention to the deadly consequences for and dramatic circumstances of refugees, we took part with a small action in Leipzig.

Speech at the demonstration against the conferenc of german home secretaries. We talked about the inner security against migrants, about new technologies to improve controll and deportations and about the term “Gefährder” (‘endangerer’).

Together with FARR (Swedish Network of Refugee Support Groups) we arranged a weekend of lectures about CEAS and externalization of borders and workshops about resistance.

We created a wallpaper about the CEAS  to inform people on the streets (english and other translations will follow up soon).

Demonstration against deportation (which in the end didn’t happen): “Ready to block” (with Protest LEJ and Asylum Seekers Movement).

Info Event: “Vor Europa´s Grenzen” (with One World One Struggel)

The day before the responsible committee in the European parliament voted on the qualification regulation, we launched a video with a simple explanation of the proposal.

Speech at the demonstration after the nationwide strike for humane aslyum politics in Sweden.

We attended the Revolutionary 1st of May demonstration in Malmö and held a speach about Fortress Europe and CEAS.

We interrupted an open meeting with European Commissioner Cecilia Malmström, surprised to be accompanied by activists from the movement Rätten till våra kroppar.

We interrupted the Swedish EU-comissions ”EU-day” at Lund University. We made sure to tell about the consequences of european asylum politics. Along with this we sent an open letter to the swedish EU parliamentarians, which also was published in Fria Tidningar.

“Dublin4Never – Aktionswoche Asyl“: theater and info-events in Dresden organized by our friends from CoA – Connecting Activists. 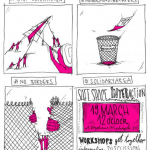 Support of the ‘welcome2stay‘ action-days. Different groups from Leipzig tried put more attention on anti-racist topics and to create some space for networking. 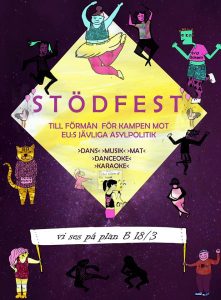 We had a support party to raise money for our local group. The venue we had was full (for the very first time)!

We arranged a lecture about the Common European Asylum System and the externalisation of borders at Kvarnby Folkhögskola. Along with this, we published an article in Fria Tidningar.

“No capitlaism without rascism“, our speech for a demonstration against ‘Pediga’

12 years ago Oury Jalloh was murdered by German police. Officially it is still handled as suicide. To have an active remerberance people are demonstrating every year in Dessau. We gave a short speech for this demonstration.

Some activists blocked a street for some minutes to critizies the EU-agenda against refugees. The action was in solidarity with ineumanity and should also put some attention on the coming deportation from airport Leipzig/Halle.

Activists did show protest against a discussion about  political “extremism”, violence and debate (AfD and CDU took part).

Symbolic protest at the airport in solidarity with people who get deported from there. Additionally we spread flyer

We gave a speech during the demonstration “Let Them Stay! Lasst Sie Bleiben!”

At our very begining there was already shown solidarity to us. Some activists dropped a banner at the University of Leipzig.

18th of December: International Day against War on Migrants